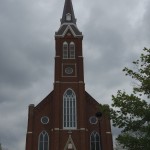 The organ that fills Sts. Peter and Paul Church with music is a 985 pipe tracker instrument crafted in 1874 by the Boston based E.G.&amp; G. Hook and Hastings company.

“It’s in pretty close to its original condition,” said Father Trosley of the organ, which was originally built for the Unitarian Church of Keoekuk, Iowa, and saw continuous use there for half a century. It then sat unused without heat or air conditioning for 20 years until the Four Square Gospel Church moved into the Koekuk building in 1949.

Since then it has endured a few other periods of non-use and has been disassembled and moved twice-first to a Victorian mansion in Ashland, KY, and now to what will likely be its home for many decades in the choir loft of Sts. Peter and Paul Church.

That gift is due in large part to Phil Hoenig, an organ enthusiast, musician, and craftsman from Fort Madison, Iowa, who has been this instrument’s guardian angel for nearly 30 years. It was Hoenig who notified the trustees of Sts. Peter and Paul Parish that the organ was available last summer, and who transported it from Kentucky to Nauvoo.

Over the course of three months, he installed it in the choir loft of the church-built in the same era (1867) as the organ.  Sts. Peter and Paul originally had a pipe organ, and its facade was still present but electronic organs had served the parish since the 1950’s.

The Hooks organ Hoenig offered the Nauvoo parish is insured for $460,000. Because its former owner had no use for it, it was purchased by Sts. Peter and Paul for the installation cost of $28,000.  It is a mechanical action organ, and can be played without electricity, though an electric blower now pumps air into the pipes.

A “moderately sized instrument” when it comes to pipe organs, its presence includes 16 foot tall pipes which make it “a rather imposing sight in a church that seats 300 people,” said Hoenig.