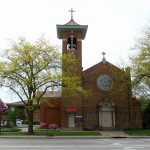 In the early days of St. Paul Parish, music was provided by a choir, since congregational singing was not a part of Catholic liturgy. Many fine voices joined in the singing of hymns as part of those early day choirs.  The old church had a small choir loft which was reached by a very steep stairway from the vestibule. No record exists of the purchase of St. Paul’s first organ, but it probably was between 1880 and 1898. The first organ was very small, of walnut or oak, and a pump instrument, which meant that someone had to be on hand to pump the pedals when the organ was played.

The first organist of record was Agnes Dorgan Sherman, who played during the time when Father Libert was pastor, from 1891 to 1898. Dora Riordan also was one of the early organists. Maude McGann Hogue, granddaughter of Michael McGann, a founder of the parish, played when Dora was ill. Later organists were Sister Marguerite, Marie Arnold, Genevieve Nester, Mary Ellen Daughterty Granda and Margaret O’Neil.  Many people sang in the early choirs, some of them music teachers and others in demand as soloists for community functions. These included Teresa Hodlen Hardy, Catherine Holden, Maude McGann, George Koch, son of Sebastian Koch, and several members of the Arnold family.

About 20 years after the new church was built, Mr. and Mrs. Frank Horn donated a pipe organ which was dedicated July 24, 1947. They especially requested that Margaret O’Neil be the organist. She took lessons from Esther Dodsworth, a local organist, in playing the new instrument, and continued to play on almost every occasion until she moved to Colorado. Marie Koch Arnold, mother of Robert and Donald, parishioners today, also an organist when the pump instrument was in use, did not play the pipe organ; therefore, if Mrs. O’Neil served as vocalist for a special liturgy, Fr. Francis Cassiday accompanied her.

As the congregation grew, so did the choir, and diocesan workshops in liturgical music were offered in Peoria to encourage musicians. Representatives of the parish sometimes availed themselves of these opportunities, but always obtaining an organist was difficult. Some of the organists during recent years have been Jo Knappenberger, Mary Kay Benda, Esther Dodsworth, Rosa Julstrom, Kathryn Knappenberger, Dan Colvin, Diana Wilt, Cynthia Izzo, Jean Smithhisler, and at the present time, Vincent Frohne. In 1982, choir members raised money to purchase organ chimes which were later dedicated.