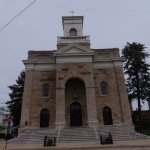 The New Organ now completed in St. Patrick’s Church here in La Salle is a fine example of the craftsmanship of one of the oldest pipe organ builders in this country. The firm of Geo. Kilgen in St. Louis was founded by Sabastian Kilgen about 200 years ago and has continued to build beautiful organs for the past seven generations.

The new instrument embodies the latest developments in organ engineering of which the company is justly proud. The organ is divided into two sections, great and swell.  The great organ contains 6 sets, numbering 366 pipes. The swell organ contains 10 sets of pipes amounting to 718. The total speaking pipes made of wood, pure tin, lead, and zinc make a grand total of 1172 pipes.

The old organ which was self contained in the center of the choir loft furnished the nucleus for the new instrument. The mechanism has been redesigned and modernized with the latest electrical action, while the pipes have been re-voiced to suit their new location on either side of the choir loft.

The new detached console which is centrally located requires no wind as other builders use, being actuated entirely by electrical means. All electrical contacts used in the construction of this instrument are of sterling silver.

The entire organ is under expression, a feature the old instrument did not possess. The new instrument has no visible pipes as the chambers have grill work covering the tone openings. Being contained in two suspended chambers, the choir loft now has more adequate space for the choir members.