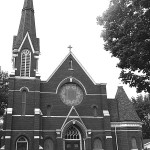 The cornerstone of the German Catholic Church called St. Mary’s in Henry was laid in 1852.  It was a large brick structure, and it housed the first pipe organ in Henry.   In the early 1900’s St. Mary’s proved to be too small for the growing congregation, and a site for a new Church on South Street was bought.  The church was built and on July 5, 1908, dedicated by Rt Rev. PJ O’Reilly.  The original organ was transferred from the old church when the new St. Mary’s Church was built.  Through his knowledge of what is necessary in a good pipe organ, Fr. Gensler helped St. Mary’s acquire an instrument which was perfect in every detail. The old organ had served the congregation for 40 years.

The Tracker pipe organ, with 700 pipes and 13 variations, was made in Pekin, IL by the Hinners Company and installed at the church in 1910. IT has two manuals; 13 stops, controlling the many tones; a foot pedal for base profundo; swell octave to great coupler; swell to pedal coupler; great to pedal coupler; swell tremolo; great foot combination; great piano combination and balanced swell. According to church records, it cost $1700 which was supplied by donations from the people.