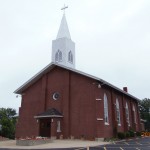 The first pipe organ was installed in the church in 1896. From 1871 until that time, a melodeon had been in use. A new pipe organ was purchased in the spring of 1907 at a cost of $567. This new organ, guaranteed for ten years, was used until 1968. An organ concert was given on May 23, 1907, by Fr. John Cummings, a talented and noted organist from Clinton, IL. The pastor at that time wrote in the Parish Chronicle: “He played it masterfully and he proved its value in every respect.” However, Father was disgusted with the lack of interest shown in the organ concert by his parishioners. He gave high praise to the concert and the choir, but then adds: “People from Lourdes took hardly any interest in it…a sign of their disposition; they have no interest in the finer things in life, of the things that surpass cows.”

In 1919, Frederica Alig began to play the organ part-time. In the summer of 1923, she became the regular organist and continued to play until 1942, a period of 23 years from the time she first started. She contributed her services free of charge.