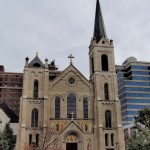 In 1906 the old organ from the original 1878 church was transferred and reset in a new church. In 1912, thanks to a donation, Fr. Diomede Pohlkamp, O.F.S., engaged the Hinners Organ Co. to install a modern tubular pneumatic organ. This was done in summer 1912, and on September 25 a grand inaugural concert was given by Mr. Charles J. Young, a famous organist of Cincinnati.

On August 8, 1949, a contract was made between the Sacred Heart Church and Paul V. Sauter, organ-builder of Chicago, to rebuild the organ completely, with the proviso that the old pipes would be retained and substantially added to. The work was finished on August 8, 1950. As compared with the previous Hinners organ, which had tubular-pneumatic action and 11 stops, the action in the new console built by W. H. Reisner Mfg. Co. was completely electrified and the stops were increased to 25.

During the renovation of Sacred Heart church in 2005, a new electronic organ was installed in the organ gallery.