Cathedral of St. Mary of the Immaculate Conception 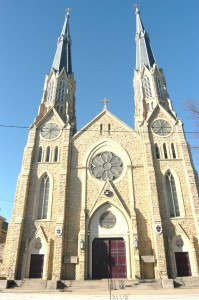 In the late fall of 1935, Bishop Joseph H. Schlarman appointed noted church musician Dom Ermin Vitry, OSB, from St. Mary's Institute in O'Fallon, Missouri, who had a wealth of experience with organs, to design the new cathedral organ. He chose the local Wicks Organ Company, and with Rev. Lyford Kern, the choirmaster at St. Mary Cathedral, personally supervised the construction of the instrument at the Wicks Factory in Highland, Illinois. It was build to be a three manual organ with 3,329 pipes and keys made of genuine ivory. In 1937 it represented the greatest and latest achievement in organ building. 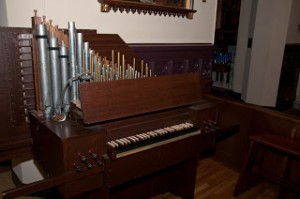 Tonal improvements by Hal Gober, 2005 The overall character of the organ's flue stops was improved by optimizing the cutups to obtain a fuller, less aggressive sound. In the Cathedral's very supportive acoustic, it was possible to do this while retaining the quite low wind pressure. We took advantage of the organ's divided stops and modified the mixture by lowering its pitch over the whole range and making the treble into a three rank Sesquialtera, adding considerable versatility to the instrument. A wedge bellows will also be installed with the twin goals of getting rid of pitch sag under high wind demand and a more interesting wind.