Blazon and Explanation of the Coat of Arms of the
Most Reverend Daniel R. Jenky, CSC, DD
Bishop of Peoria, Illinois 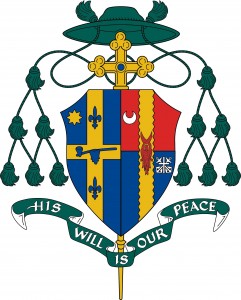 On the dexter for the Diocese of Peoria; Azure, on a cross throughout and in the first quarter a mullet of eight points Or, a calumet fesswise between two fleurs-de-lis in pale of the field. On the sinister for Bishop Jenky: per fess Gules and Azure, on a pale indented Or between in dexter chief a crescent Argent and in sinsiter base two anchors in saltire Argent surmounted by a Latin cross Or, a seraph Gules nimbed Or.

"HIS WILL IS OUR PEACE."

The entire "achievement" or coat of arms as it is generally called, is composed of a shield with its charges, the motto and external ornaments. As one looks at the shield, the terms dexter and sinister must be understood contrariwise, as the shield was worn on the arm in medieval days, and these terms were used in the relationship of the one behind the armor.

The dexter impalement, on the left of the viewer, bears, according to custom in ecclesiastical heraldry, the jurisdictional arms of the Diocese of Peoria.

The arms consist of a blue field charged with a gold (yellow) cross of Faith bearing two fleurs-de-lis and a calumet-"peace pipe" also tinctured blue. In the first quarter is a gold (yellow) eight-pointed star. The gold cross and two fleur-de-lis honor the French missionaries who brought the faith to the Indians of the Mississippi Valley. Gold and blue fleur-de-lis were the colors and charges on the ancient arms of France. The two fleur-de-lis also commemorate the first missionary, Fr. Jacques Marquette and his companion, Louis Joliet, who passed through the territory which is now the Diocese of Peoria in the state of Illinois.

The calumet, the name given by the French to the "peace pipe" of the American Indians, occupies the traverse member of the cross. When Fr. Marquette and Joliet made their memorable voyage down the Mississippi River, the chief of the Peoria, a branch of the Illinois Indians, gave a calumet to Fr. Marquette. The report of the voyage says about the calumet: "There is nothing more mysterious or respected among them. Less honor is paid to crowns and scepters of kings than the savages bestow upon this." The star in the dexter chief is derived from the coat of arms of LaSalle, who established Fort Creve Coeur across the river from Peoria in 1680.

The sinister impalement, on the right of the viewer, displays the personal Arms of Bishop Jenky. By combining the personal Arms on same shield with those of the Diocese of Peoria the spiritual unity of the Bishop with his flock is signified, a thought also conveyed by the ring, which the Bishop wears on his right hand.

The personal Arms of Bishop Jenky consist of a shield divided "per fess" across the center, the upper portion red and lower portion blue. Overall is a"pale," or band indebted from the top to the base of the shield tinctured gold (yellow). The pale is charged with a seraph (red) with a gold (yellow) nimbus. In the dexter chief is silver (white) crescent in the sinister base base the charges of the Arms of the Congregation of the Holy Cross: two silver (white) anchors in saltire surmounted by a Latin Cross gold (yellow).

The red and blue of the surface of the shield honor the Sacred Heart of Jesus and the Blessed Virgin Mary. The gold (yellow) indented "pale" honors the Holy Trinity. The silver (white) crescent and the red seraph with gold (yellow) nimbus are to be found on the Arms of the Diocese of Fort Wayne-South Bend in the state of Indiana. These charges honor the patrons of the Cathedral of the Immaculate Conception in Fort Wayne, and the Co-Cathedral of St. Matthew in South Bend.

The red upper portion of the Arms and the silver (white) of the crescent honor the Polish heritage of the family of Bishop Jenky.

It is customary for members of religious orders to display the Arms, or incorporate the insignia of their order on the personal Arms when ordained to the Episcopate. This custom has been continued by Bishop Jenky with the two silver (white) anchors in saltire and gold (yellow) Latin Cross overall in the sinister base. The emblems on a blue background are the Arms of the Congregation of the Holy Cross.

The motto, "HIS WILL IS OUR PEACE," is from the Divine Comedy-Paradiso, Canto 3, line 85, by Dante Alighieri (1265-1321) and succinctly summarizes the spiritual advice of the prophets and saints from ancient times.

Behind the Arms is placed a Gold processional cross and ensigning the whole achievement is a pontifical hat with its six tassels on each side, disposed in three rows all in green. These are the heraldic insignia of a prelate of the rank of bishop in accordance with the instruction of the Holy See, dated 31 March, 1969. Before 1870 the pontifical hat was worn at solemn cavalcades in conjunction with Papal ceremonies. The color of the hat and the number of tassels were signs of the rank of the prelate, a custom still preserved in ecclesiastical heraldry.

The Arms of the Diocese of Peoria, Illinois were devised c. 1937, by Pierre de Chaigon La Rose (1871-1941) of Cambridge, Massachusetts (the Arms were first displayed in the 1938 edition of the Official Catholic Directory published by P.J. Kenedy and Sons).

The personal Arms of Bishop Jenky were devised by James-Charles Noonan, Jr., October 1997.

The impalement of the Arms of the Diocese of Peoria with those of the Most Reverend Daniel R. Jenky, CSC, DD, was undertaken by A.W.C. Phelps (Cleveland, Ohio), February, 2002.